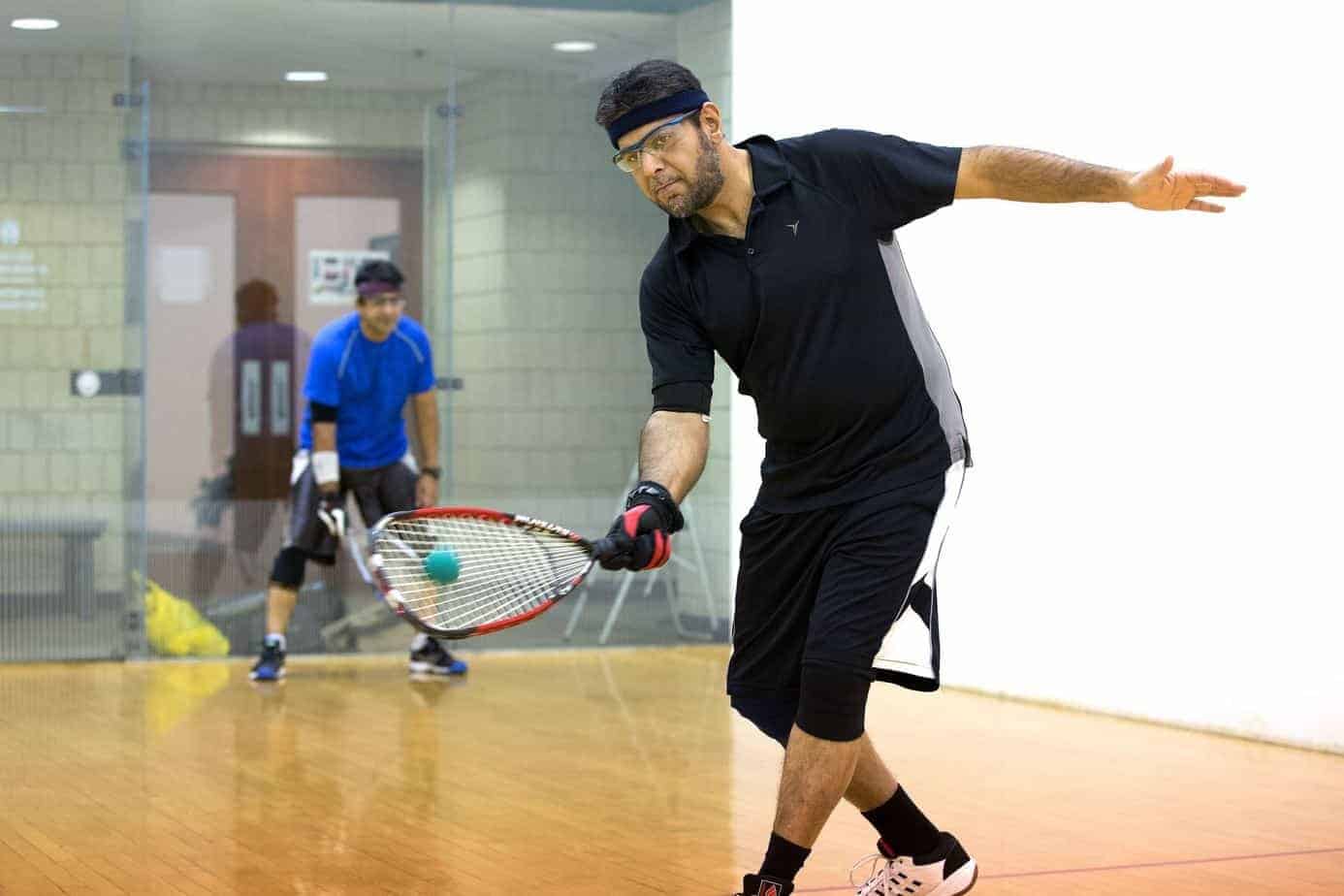 ​Dunlop’s Ultimate Tour indoor racquetball shoe is a worthy competitor in our list of racquetball shoes. This shoe possesses some unique features that make it great functionally and safety wise.

Another popular racquetball shoe is the Ektelon NFS Classic MID. These shoes feature a balanced blend of synthetic and natural materials that work together to provide the wearer with a comfortable, functional shoe.

Yet another worthy option is the NFS Assault indoor court sneaker shoes by Prince. As their name implies, these shoes have more of a sneaker construction, which makes them lightweight and ideal for increased running speed.

The Spring Pro indoor shoe manufactured by Head is one of the most popular racquetball shoes on the market. Not only does it feature an aesthetically-pleasing design, but it also possesses many of those features that make for an optimally functioning racquetball shoe.

Perhaps the most notable advantage of racquetball shoes is that they provide players with a bit of traction that keeps them from slipping and sliding all over the court. They are also specially made to be tight enough to provide players with the stability that they need when maneuvering around the court. When properly designed, racquetball shoes can not only improve a player’s game, but they could also help reduce the risk of injury by making it so that players experience more control and stability when on the court.

What to Look for in Racquetball Shoes

However, you don’t want the entire shoe to be narrow because you want there to be enough room for the toes to expand in the front of the shoe. Shoes that aren’t tighter in the back don’t provide the support that the ankle needs, so players could experience a greater risk of rolling their ankles when performing the quick backwards, forward and even sideways movements required on the racquetball court. Ideal racquetball shoes are also light enough that players can run without being bogged down by heavy shoes.

How to Choose Racquetball Shoes

There’s three primary product features to look for when choosing racquetball shoes, and if you can happen to find a shoe that possesses all three of them, then you can realize the most benefits.

Look for racquetball shoes that are snug fitting but not so snug that they’re painful or impair movement. If they’re too snug, then they could possibly lead to circulation issues, which certainly wouldn’t be good for anybody involved. Ideal racquetball shoes won’t squeeze or pinch the feet or toes, but they’ll be snug enough around the ankles that the foot won’t slide around in them.

Ideal racquetball shoes have plenty of cushioning around the mid-foot, heel and forefoot areas. This makes it so that players can push off the floor when performing jumps and runs and land with minimal shock to their bones and joints. Shoes that feature sock liners can provide players with even more comfort when on the court.

The soles of the the shoes are arguably the most important element of their construction. According to Tiburon Pennisula Club, racquetball players are required to wear gum rubber-soled shoes. Shoes with gum rubber soles can grip the court better than their counterparts. This is especially important since racquetball involves a lot of lateral movements. The racquetball court is a specialized court that’s been covered with a protective coating of oil-based polyurethane sealer, so having shoes that have enough grip on them is essential for safe and effective gaming.

Best Way to Use Racquetball Shoes

Always keep your racquetball shoes clean. It’s a good idea to select shoes that have white or light-colored soles so that it’s easy to see when they’re dirty and require cleaning. Keeping the soles of racquetball shoes clean and free of any dirt and debris can help keep the surface of the court streak-free, and it can also ensure that your shoes function optimally.

Just because a shoe is advertised as a racquetball shoe doesn’t necessarily mean that it possesses those key features that prevent slipping and sliding and enhance stability. While some people believe that you can use basketball or volleyball shoes on a racquetball court as well, it’s best to purchase shoes that have the specific type of gum rubber soles that are made for racquetball courts. While similar types of movements might be used in other sports like basketball and volleyball, ultimately basketball and volleyball shoes are different from racquetball shoes. They might features soles constructed of different materials as well as shoes without full collars or sock liners.

After discussing the pros and cons of each of these popular racquetball shoes, the Dunlop Ultimate Tour indoor racquetball shoe is the clear winner. Not only does it possess more pros than any of the other shoes, but it’s also not necessarily the most expensive one of the market, making it more affordable. It possesses all those key elements of what to look for in racquetball shoes concerning snugness, cushioning and soles as well as plenty of other extra benefits. Players who’re looking for a comfortable shoe that can up their game while decreasing their risk of injury will likely be able to benefit from the Dunlop Ultimate Tour. It’s premium design offers ergonomic fit and comfort while still offering players with performance features.

When it comes to shoes, Brandon is our expert! He currently works in a shoe department store as a supervisor. The department carries everything from athletic shoes to work boots, so he has experience in all sorts of shoe types. His strong suit is athletic shoes, utility shoes (tactical boots, work boots), and other sports shoes. He prides himself on the varieties and brands on a weekly basis, as they obtain about 30-50 new styles every week. This helps to strengthen his product knowledge and gives important insight to customers that aren’t necessarily sure what types of shoes they need. Also, he is a big fan of tennis. He practices on a regular basis and is an expert in tennis equipment.